Today we’ll speak about a core feature of Icy: the hunting. Hunting is of the utmost importance to all the people living in the Frozen World, for the simple reason that the cold climate prevents to grow any kind of food, since even during summer’s nights is not rare to have temperatures below 0 degrees.

The few humans living in the Frozen World need to eat and the most reliable source of food is, in most case, killing other living beings to eat their meat. Meaning that most nomads hunt for animals as part of their daily routine, with all the dangers that hunting in a wild wood may bring. It means also that some people suit themselves with human’s meat and cannibals are a rare but scary reality in the Frozen World. 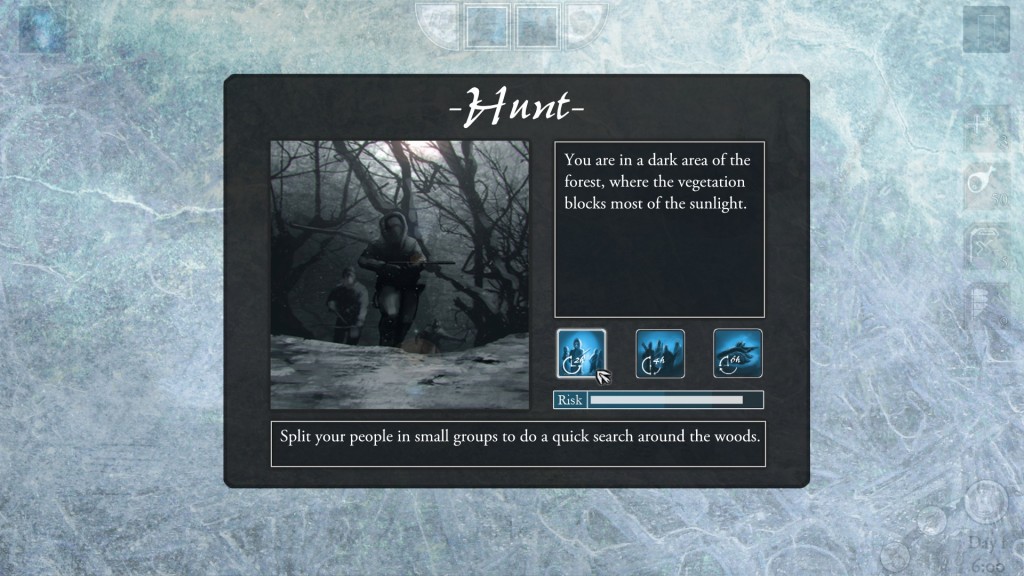 While travelling on the world map the player can see a lot of forests around and they’re the only place where hunting is possible. The player just need to move his/her party on a forest and press the hunting/scavenging button to activate the hunting phase. Then he/she will be able to choice between spending more time hunting and taking less risks or spread the party to cover a larger area, increasing the chance of having trouble.

Hunting is safe when the player meets a lonely deer slowly walking around, but even a small wolf pack can be a threat to an unexperienced group. Of course humans can rely on firearms to have an advantage over the possible threats, since animals are scared and easily killed by a noisy gun, but as we said in the previous news bullets are a scarce resource that’s also used as currency in the Frozen World, so shooting in full automatic on a deer’s body could actually be more costly than buying the meat in the nearest settlement.

That’s why hunters mostly rely on different ranged weapon for their job: bows. They are cheap, silent and arrows can be pulled out of the carcass and used more than once. You can’t use your bow to efficiently fight in a firefight, but it is a perfect weapon to hunt without wasting precious bullets or using complex traps. 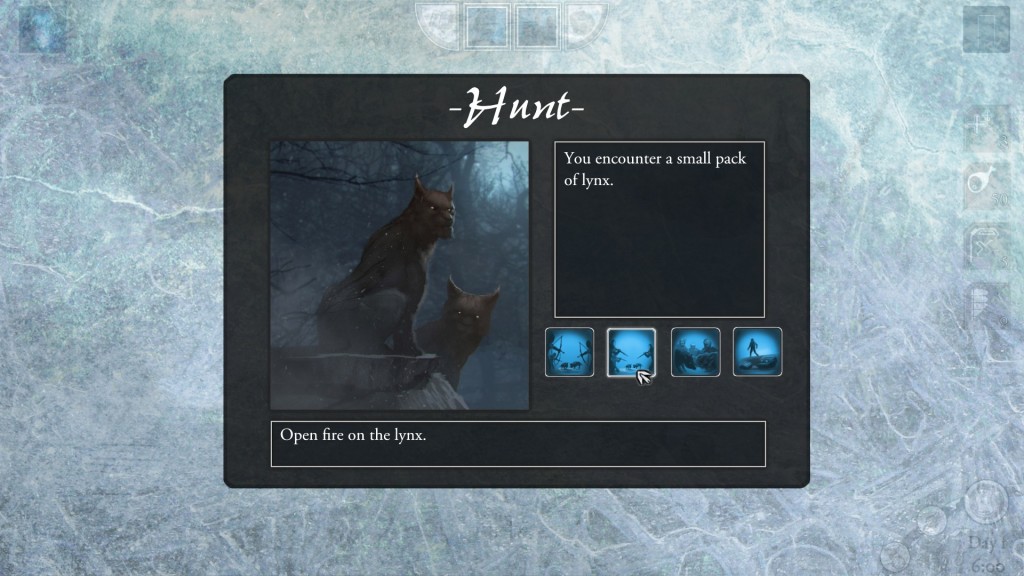 During the hunting events the player will have the chance to meet different kinds of animals and each one of them offers a different threat, different rewards and compels the player to use different tactics to take care of the situation. Herbivores aren’t usually a threat, but when the group gets surrounded by a lynx pack the hunters may become the preys, meaning that they will need a completely different approach to emerge victorious.

Living in the Frozen World is living in a situation of constant danger and the player needs to know that before doing any step. If the group has no urgent need for food the best tactic may be to avoid predators and use bows and arrows to take down some herbivores, but when half of your people are starving the best way to survive could be to shoot with firearms on some wolves. Wolves’ meat isn’t good as deer’s one, but even rats’ meat is good when starving.

The hunting outcome doesn’t depend only on what the player face during hunting, but also on how much the player is skilled in hunting. Being an RPG, Icy will let the player choose and improve different skills, hunting is one of those skills. A good hunter will have more ways to hunt down animals, will take less risks and will have better outcomes.

The next time we will speak about the scavenging, another important part of a nomad’s life that’s not devoid of dangers.