Today’s post will cover the basics of survival in Icy. The player will be the leader of one of the many small groups of nomads that live wandering around the Frozen World. The daily routine of a nomad consist mostly in hunting for food, scavenging hoping to find something useful and walking, walking and even more walking.

Stable settlements are rare in the Frozen World, due to the cold climate that prevents any attempt to cultivate food and that is why most human survivors regressed to a nomadic or semi-nomadic lifestyle. We created proper mechanics to simulate this particular lifestyle, to offer a complete survival experience to the player, that’s not based only on what happens during dialogues. 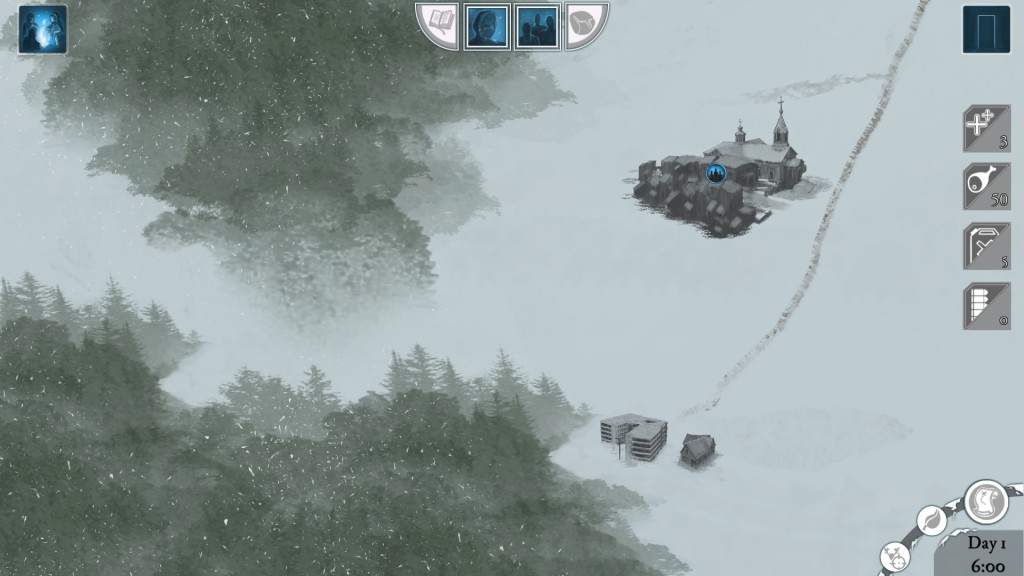 The player will be able to freely travel around the game map, without any artificial restraints. Most of the elements drawn on the map have an in-game purpose, like woods, buildings, villages and roads. Woods are the only place where the player can hunt down animals for food; buildings and villages are useful for scavenging goods of any sort, at least the ones that are still available after years of looting; roads can be used to travel faster on the world map. Travelling around the world is not something that can be done light hearted, because the Frozen World is full of dangers and moving around without a purpose is just a waste of time and food.

The player will have four main resources to take under control: food, fuel, medicines and bullets.

The food is obviously needed to keep the people well fed and in good shape. The primary source of food is hunting, but it can be bought in certain settlements too, meaning that the player will need to bring his/her people into the woods and try to kill something big enough to feed everyone’s mouth. It’s easy to kill a lonely deer, it’s not that easy to face a wolves pack and it’s even harder to face the strange, mutated creatures that appeared some years after the apocalypse. The player can try to minimize the risks, but that means spending more time hunting around and sometimes it will be necessary to be less careful, hoping to achieve more in less time.

Medicines represents any kind of medical supplies that can be in the hands of some nomad survivors: medical herbs, bandages, stiches and anything else that can be used to accelerate the healing rate of a companions. Medicines are rare to find, meaning that the player should worry about the injuries that someone can get hunting, scavenging, fighting or simply being unable to light a fire for the night.

The fuel is important to keep the people warm when the Sun sets. Starting a campfire is not that obvious in the Frozen World. Survivors can’t just chop down a tree and hope to use its wood to start a fire; it’s also impossible to gather branches around and light them, because they will probably be too wet to burn without a decent heat source. That’s why fuel is so important. The fuel represents anything that can be easily burned or can produce a flame: lighters, old books, dry wood, plastic materials. It’s not hard to find this kind of stuff around, because there is still something to scavenge in the ancient buildings, but there’s a maximum limit of fuel that can be brought around. The player will need to carefully plan long journeys across the world map, because when the group is out of fuel there are only two choices: camp without a fire (and suffer some damages) or try to find someplace near where to sleep. Finding a protected place where to sleep can prevent all damage, but if there aren’t buildings close enough to the player’s position the situation will be worsened and the group will suffer heavy damages.

Bullets are useful not only to kill stuff with a firearm, but also as currency. We decided not to create different types of ammo for different weapons, so the bullets will work with any gun, from the 9mm pistol to the sniper rifle. Being both the main currency and a useful resource in many situation, bullets need to be carefully used only when necessary. Killing a deer with a gunshot will be probably the easiest way to have a good dinner, but trying to kill it with an arrow will probably be cheaper.

In the following days we will cover the mechanics of hunting and scavenging, which are the main way to get those resources and other more unique goods, that are stored in the party’s inventory.